The Roswell incident or “Roswell UFO incident”, concerns US efforts to recover materiel from an alleged crash site just northwest of Roswell, New Mexico, between late June and early July, 1947.

Just before the stir at Roswell, a UFO flap happens in June and is reported worldwide.

Maury Island incident. On June 21 1947, Fred Crisman and Harold Dahl were off the port of Maury Island, Washington when they reported having witnessed ‘six doughnut-shaped objects in the sky’. One of the objects dropped a substance that resembled "white metal"’. Pieces had fallen onto their boat, breaking a worker's arm, and slicing their dog dead.[1]

The information was relayed to Kenneth Arnold, who contacted an Air Force intelligence officer to report the incident. Two officers flew in from California to investigate, but concluded that the metal objects were “aluminum” and not of interest. The officers then died in a car crash on their way back to California.[2]

William Brazel reported having found a “flying disc” at Foster Ranch, about 75 miles northwest of Roswell, New Mexico. According to the Associated Press, Brazel brought some of the remnants to the Roswell Sheriff’s office on the 6th. As soon as the Roswell Sheriff got the tip, he contacted the Roswell Army Air Field (RAAF),[5][4] who put out an ATL "attempt to locate" with surrounding local police departments of any suspicious material. Major Jesse Marcel was assigned to investigate Roswell and retrieve anything he was to find.

Upon his investigation, Marcel notified Col. William H. Blanchard, 509th Commanding Officer, of the debri field location where an object was actually found. Gen. Ramey was briefed on the recovery of the object, and he ordered that it be taken to Fort Worth Army Air Field, TX (now Naval Air Station Joint Reserve Base Fort Worth).[5]

The Roswell Daily Record picked up Brazel’s story which forced the US military to hold a press conference. On July 8, 1947, RAAF public information officer Walter Haut issued a press release stating that personnel from the field's 509th Operations Group had recovered a "flying disc", which had crashed on a ranch near Roswell.[6]

The following day, another press release was issued to reverse Walter Haut’s statements on the 8th. Announcements were given by Brig. General Roger M. Ramey, commander of the Eighth Air Force, who stated that the object was a “weather balloon”.

The Associated Press reported that the “balloon” was identified by Warrant Officer Irving Newton of Medford, Wis., of the base weather station, and that “plans to fly the object to Wright Field for further investigation were cancelled.”[5]

General Ramey then spoke over a local radio station (WBAP) Tuesday night after the Eighth Air Force headquarters was flooded with queries concerning the object. In his broadcast, he said that anyone who found an object he believed to be a "flying disc" should contact the nearest Army office or Sheriff's office.[5]

Ramey then made the statement: "I don't say these devices are what people have called disc," he said. "There is no such gadget (as the disc/disk) known to the Army--at least this far down the line."[5]

The US government attempted to coverup further tracks by making a statement in 1994, that the object that crashed in Roswell in 1947 was a Project Mogul balloon, that launched June 4, 1947.[8]

In 1997, the US Air Force gave a new explanation, claiming it was a crash test with dummies.[3]

Thomas J. DuBose, later attested in a sworn affidavit: “Actually it was a cover story… The balloon part of it… the remnants [from Roswell] were taken from this location, and Al Clark (the base commander at Fort Worth) took [them] to Washington, [D.C.,] and whatever happened then, I have no knowledge. The part of it [the weather balloon] was, in fact, a story that we were told to give to the public and the news, and that was it.”[9]

The Roswell incident includes two other alleged “crash sites”, the Corona UFO and the Trinity UFO, in and near Socorro, New Mexico.

According to Barney Barnett, a civil engineer with the US Soil Conservation Service, on a military assignment in Socorro, New Mexico, he attested to finding bodies and a “crashed” UFO near Socorro.[4]

Barnett gave the UFO location with the bodies, as being at the Plains of San Agustin, just west of Socorro.

In 1992, the J. Allen Hynek Center for UFO Studies, Chicago, Illinois and the Fund for UFO Research, Washington, D.C. assessed the claims of Barney Barnett and others. It came in a 90 page report titled, “The Plains of San Agustin Controversy”. They determined that it was highly unlikely that a UFO had crashed at the Plains of San Agustin. The story elements surrounding the claims were circumstantial.[11]

According to paleontologist C. Betram Schultz, members of an archeological team led by W. Currey Holden, told Schultz about a crashed UFO around the time of occurrence (Socorro site). Holden was sought after for an interview late in life, but was too disoriented to give any substantial collaboration.[12] 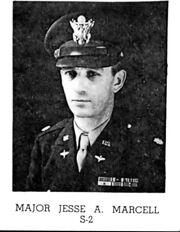 In January 1949, he signed a statement that he fully intended to continue his career in the Air Force, but in the following year he received word that his elderly mother required assistance that his sister could not provide.

He was granted hardship release from active duty and returned home to Houma, Louisiana in July 1950.

When he was released from active duty, his commission as a Lieutenant Colonel was transferred to the Air Force Reserves, and Marcel eventually received his full discharge in 1958.

Marcel took up a long time hobby in Ham Radio and became an electronic repairman specializing in televisions, transmitters and receivers.

In 1978, one of his Ham Radio correspondents put Marcel in touch with Stanton Friedman, a UFO researcher.[13]

Jesse Marcel submitted to an interview with Friedman in 1978.[14]

Marcel was quite certain that no bodies were among the debris field at Roswell.[4] But, he did believe that the true nature of the UFO debris was being suppressed by the military. Marcel said, 'I couldn't say anything. It sure wasn't part of a weather balloon; I knew that. But I didn't know what it was. We came back to Roswell. My picture was in the papers all over the place,' he added, 'and I still don't know what it was!' ".[16] His account was featured in the documentary UFOs are Real (1979).

Several civilians and families in Roswell, New Mexico, such as Mac Brazel, claimed to have possessed some of the Roswell material at one point.[17][18] The material was claimed to be impervious to burns, tearing, or destruction. In some instances, it would bend back to its original form, if crumpled.[17] Jesse Marcel and his son Jesse Jr., claimed to have handled such material.[19]

According to geologist Frank Kimbler, the ‘Roswell material’ that littered the debris-area from the Roswell UFO incident, was an aluminum aerospace alloy. The US military confiscated as much of the materiel as they could find, and scrubbed all sites.[20] However, Kimbler claims that he was able to aquire small samples of the Roswell aluminum.

Since Thursday, July 2nd, 2018 the ‘Brazel field’, which is about 75 miles out from Downtown, was made officially open to the public.[21] Kimbler had combed the physical area where evidence was revealed of military presence, which can be dated to the late 1940s. Professional analysis of Google Earth's aerial imaging also shows visible indications that the crash-site was in fact "scrubbed".[20]

What little remains of the alloy pieces that he was able to acquire, Kimbler had analyzed by New Mexico Tech. The results, was that the alloy is rated as a 6000 series aluminum which is typically used in aerospace technology.[20]

Kimbler had also submitted alloy samples to EAG Labs (Evans Analytics Group) for magnesium isotope testing. The first alloy samples tested, done from their spectrometer equipment, gave the results of being at the edge of analytical error. The overall results give a strong indication of non-terrestrial origin, however a stronger spectrometer is required, to give a more exact reading outside of Earth's terrestrial sphere.[20]

Kimbler’s investigative work has caught the attention of the Bureau of Land Management (BLM), who has demanded of him to appear at a BLM facility, and bring his samples in for a review.[20]

By the 1930s, aluminium was widely used in aviation, shipbuilding and automotive industries, starting its progress in civil engineering. The Empire State Building, which was the highest building worldwide until 1970, was built in 1931. It was the first building where aluminium was widely employed in construction, both in the basic structures and in the interior.[22]

World War II changed the complexion of the basic aluminium market bringing aviation and the manufacture of tank and automotive engines to the forefront. The war pushed the countries fighting Germany to increase the use of their aluminium production capacities. Designs of aircraft were improved and the new aluminium alloys were developed with them.[22]

The human race “took a leap into space” a decade later after the ‘Roswell incident’. The use of aluminium was critical and therefore triggered the aerospace industry to become one of the key spheres. In 1957, the USSR launched the first artificial satellite into orbit. The satellites hull consisted of two separate aluminium semi-spheres joined together. All subsequent space vehicles were produced using aluminium.[22]

Then the Space Race was ignited when the United States established NASA in 1958.

It’s believed that such advancements have come about because of entering into a “treaty” or “agreement” with an ‘alien presence’.[23] The Lt Gen interview 1989 transcript states:

“The U. S. Govt. and the British have made secret treaty
agreements with the aliens in exchange for technology and
so-called recon missions during times of human conflict.”

Retrieved from "https://alienresearch.fandom.com/wiki/Roswell_incident?oldid=10797"
Community content is available under CC-BY-SA unless otherwise noted.