Memorandum 6751 is a US document from the FBI archives (p.22), that discloses a "supernormal" presence:

"They are NOT excarnate earth people, but come from their own world. They do NOT come from any "planet" as we use the word, but from an etheric planet which interpenetrates with our own and is not perceptible to us."

The study of alien phenomena is known as xenology, a branch of study in ufology. Xenology is of interest to ufologists and alien hunters, due to numerous Close Encounter reports that have gone on record, since the 19th century. Information about alien appearance and intelligence has been gathered from sightings, abduction cases and alleged contact.

It is an established fact, in all sense of legal terminology, that since the early 1950s, unethical human experimentation in the United States and in the Soviet Union/Russia,[1] were being conducted at black sites. One known location was the Edgewood Arsenal human experiments at Aberdeen Proving Ground (See also Project Penguin). These secret Cold War experiments included testing of various drugs such as Lysergic acid diethylamide (LSD), a hallucinogenic drug that antagonizes psychological phenomena (See psychosomatic medicine). They were heavily used in Project MKUltra.

Were there human volunteers for these secret programs?

Enter alien abduction cases. An alien abduction case is often classified as a Close Encounter of the fourth kind. Alien abduction claims are described as "subjectively real memories of being taken secretly against one's will by apparently nonhuman entities and subjected to complex physical and psychological procedures".[2] Subjects may suffer from posttraumatic stress disorder.

The alien abduction phenomena can be hypothesized by the following probabilities, in perhaps this most likely order:

Is psychosomatic drugs to blame for all alien sightings? In a 1995 study, alien abduction cases of Gray beings, reported 75% in the United States, 2% in Continental Europe, 12% in Great Britain,[3] and the remaining percentage as other. Do all psychosomatic drugs produce the same visual effects in all human genome types across the World? Likely not.

Interestingly, Gray beings are the most common entities reported. Though appearances may vary, there are many consistent features: The reported average height is 3-5 ft, with frail looking bodies, and disproportionate large craniums. Eyes are big and slanted; mostly jet black with some absence of the pupil, or have slit pupils as reptiles do. 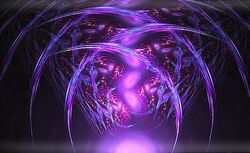 The Drake Equation is a mathematical equation used to calculate the statistical probabilities of intelligent alien life contacting Humans on Earth.

Extraterrestrial life is a subject of study in Astrobiology, a discipline of study needed for prepping astronaughts in zero gravity space, to ensure safety, health, and wellbeing. The concept broadened, after trace discoveries of ice molecules were found by probes observing various astronaumical terrain bodies (ie. Mars, and natural satellites like Europa).

The first alien life discovered, was extraterrestrial bacteria in 1996 by NASA scientists on a Martian meteorite.[4] In 2001, the "Red rain in Kerala" was attributed by some to extraterrestrial bacteria. Recently, there have been discoveries of bateria living in extreme environments on Earth, such as in glaciers; which gives clues to possible living organisims in subsurface ice conditions, like that of Mars, and Europa.[5]

Through the discipline of astrobiology, studies of Goldilocks conditions and Habitable zone (CHZ) models, can help researchers to determine if extraterrestrial organisms can survive even outside the CHZ.

Retrieved from "https://alienresearch.fandom.com/wiki/Introduction_to_aliens?oldid=10543"
Community content is available under CC-BY-SA unless otherwise noted.