Welcome to the Alien Research's sandbox!
This page exists so that you can practice editing or formatting (see Editing help) without changing any serious content. Feel free to try wiki editing out here first.
There is a tutorial on the Central (coordinating) Wikia that will step you through more of the things you can do. Wiki allow for rather complicated formatting. It can look overwhelming when you begin, but don't let it worry you. Just start with the basics... enter some text, and learn the other pieces as you go. Your content contributions are welcome and important. The wiki is a collaborative effort and others can help with formatting and other improvements.
Best wishes! 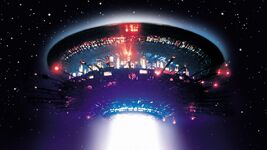 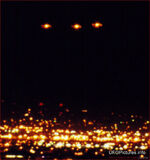 Close Encounter of the first kind 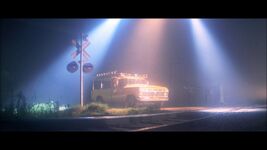 Close Encounter of the second kind 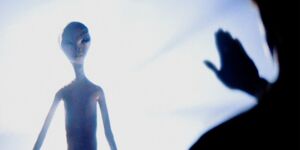 Close Encounter of the third kind 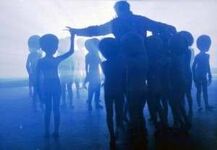 Close Encounter of the fourth kind 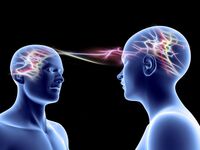 Close Encounter of the fifth kind

The extraterrestrials who visit us come from a double star system in the constellation of Cygnus. This system is approximately one thousand nine hundred and twelve light years away, and it is too faint to be detected by even our most powerful telescopes. The system consists of a small white dwarf orbiting a large, massive star. The period of rotation is approximately 897 Earth days. The Cygnans live on a planet that circles the small white dwarf.

Our Cygnan friends have developed the ability of faster-than-light travel, although we cannot guess at their mechanism. We know that the travel is nearly instantaneous, but that it is quite sensitive to gravitational fields. This creates a problem for the Cygnans. The massive star in their system creates an immense gravitational well, and therefore they can only leave their planet when their white dwarf is at the aphelion of its orbit. Thus, they can send ships out into the galaxy once every 897 Earth days—which is one of their years—but the ship must return within approximately two Earth hours, or else their home planet will move back into the gravitational well and it would be impossible to return safely.

Why do they visit us?[edit source]

Nearly two millennia ago, a Cygnan mechanical probe ship much like our own Voyager and Galileo probes flew by our planet and broadcast images back to the Cygnan system. These images traveled back to the Cygnans at the speed of light, reaching the Cygnan star system about fifty years ago. The Cygnans were fascinated by our planet. They had no interest in our crude technology, of course; they were fascinated by our religions. The Cygnans have no such concept, and they found the idea to be inexplicably compelling. And so on the next aphelion, they launched a ship, containing one of their greatest scientists, to come and study our civilization. The scientist carried a map of all the holy sites that had been detected on our planet by the mechanical probe ship. We have never seen this map, but we believe that it designates over sixty sites on our planet. Some of these sites are well-known to us Earthlings, but others are areas of great spiritual potential that remain still unknown to us. The scientist’s mission was to gather data on each of these sites in turn, and then bring it back to the home planet for analysis. The data would all have to be gathered within two Earth hours, but that was not a problem given their advanced technology. This ship was dispatched seventeen aphelions ago, which is nearly forty-two of our own years. It never returned.

For reasons which may never be known, the Cygnan scientist’s ship crashed during the mission, and it was nearly completely destroyed. We have reason to believe that the crash occurred in or around the Los Angeles region. The Cygnan scientist was critically injured and was nearly killed by the impact.

The United States government recovered the remains of the crash and brought them to Long Beach, to study them under a high security white domed building. In almost no time they determined that the ship had been occupied, and that the occupant had probably survived. They of course wasted no time in trying to track down the survivor, so that they could capture it and study it.

The Cygnans had no idea that anything was wrong until their scientist failed to return. Since then, the Cygnans have sent a rescue ship to try and recover their lost scientist. Unfortunately, they have no idea where on the planet the crash occurred—all they have is a copy of the map that the scientist took on the mission. They know that the scientist must have crashed while studying one of the sites on the map, but they have no idea which one. And so every aphelion they send their rescue ship to a different location designated on the map and send out conventional and psychic broadcasts, searching for their scientist. Of course, the odds are very small for any single visitation that the Cygnans would pick the actual location where the original ship crashed, but still they keep coming, every 897 days, to continue the search.

Meanwhile, back on Earth, the scientist was stranded, injured, hunted, far from home, and knew almost nothing of our culture. Nonetheless, the scientist was able to survive by assuming a human form and learning our language. She took the name of Trelix R. Saratreet, and tried to adapt to the strange ways of our society. Every time the rescue ship approached Earth, Trelix would receive strong psychic impressions from the Cygnans on board, and through these psychic impressions, she would see the location on Earth where the rescue ship was waiting. And so Trelix has remained here, wandering through the Los Angeles area for nearly 42 years. She has been constantly hiding and moving, having been pursued by government agents for most of her time here. Every aphelion she gets a vision of her fellow Cygnans searching for her, but they are too far away, and then they are gone, leaving her once again stranded and alone.

But she is no longer completely alone. About three years ago, her psychic powers and her knowledge of the 897-day cycle brought her to the attention of Dr. Horof, who learned her secret and vowed to help her return to her home. She has contracted a fatal disease which is common among Cygnans who spend too long away from her home planet and the unique circadian rhythms of her double-star system. No Earthly medicine can save her—we must return her to her home.

Trelix has informed ISETV that she salvaged a transmitter from the crash, and that if the transmitter is activated, it should be able to communicate with the ship as it approaches and direct them to our location. Trelix dropped pieces of this transmitter at different times during her travels, and an essential piece of the transmitter still lies at the site of the crash itself, where she left it nearly forty-two years ago. Unfortunately, Trelix has been through so much trauma that she can tell us almost nothing about the route that she followed over the past forty-two years. She cannot even tell us the location of the crash itself.

In order to operate the transmitter, you must have the proper code. In her weakened state, Trelix cannot remember any part of the code, and so we must discover it for ourselves. All that she knows is that it was a journey of many hundreds of miles, and that she faced incredible hardships along the way.

Our only hope is for you to somehow retrace Trelix’s path, retrieve the pieces of the transmitter, reconstruct it, and then deduce the code so that the transmitter can be activated. Only then will the approaching alien ship know that Trelix is waiting for them here in Los Angeles.

At every aphelion, when Trelix had her vision of the rescue ship, she experienced a brief period of clarity of thought in which she could remember where she had been hiding during the last aphelion. Thus, at every aphelion she left directions which described how to reach the location where she experienced the prior aphelion. She calls these directions “locator clues,” and she meant for them to direct her from location to location back to the crash site, in case she ever regained her strength enough to retrace her path. She encoded each one in a different way, making it as difficult as possible for anyone else to use them to learn her route. She cannot remember any of the specific codes that she used, but she knows that some are incredibly difficult, and she doubts that anyone from our planet could solve them all.

Trelix also kept a detailed log during her travels. The log entry is a completely separate document and is designated as such at every location. Trelix assures us that all the information that anyone would need to get to her previous location is contained in the locator clue, and so the log entry is not essential to figure out the last step in Trelix’s path. And yet Trelix insists that the log entries are critical. We here at ISETV have been unable to understand this mystery.